The rosettes mathematics plugin is used to calculate the plane strain and plane stress state, measured by strain gauges in common strain rosette patterns. When you add the rosette mathematics in DEWESoft’s Math module, the following Rosette setup window will appear.

In the Rosettes setup you can define inputs from strain gauges, calculation settings and desired strain and stress outputs. Settings that go together are grouped under panels: 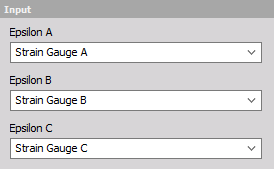 Here you can pick which channels are going to be the outputs of the Rosettes math. There are eleven strain and stress outputs available.

With the strain outputs you can get all the parameters needed to represent the two dimensional strain state in a Mohr’s circle. 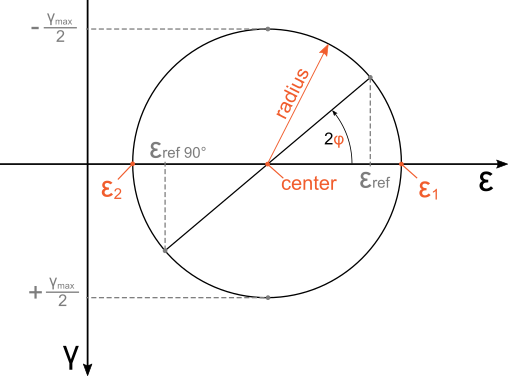 The outputs that can be selected in the Rosettes are in orange.

Hook’s law is used to calculate the stresses from measured strains. Calculated stresses are valid for materials and loadings where relationship between strains and stresses are linear and equal in every direction of the measured plane. Young’s modulus and Poisson’s ratio that are needed for the transformation can be specified under the linear elastic parameters. Since the strains are only measured on the surface, stress outputs are valid only when the stress state can be regarded as planar. This is true when stresses perpendicular to the plane of measurement can be neglected in the analysis.

In the output section you can see and modify channel properties of outputs that are activated in the Output channels section.

To determine the two dimensional strains at least three normal strain measurements in different directions are needed. Rosettes offer four different rosette types to pick from: 45°, 60°, 120° and 90°. The first three (45°, 60°, 120°) calculate the strain state from three strain gauge measurements. They can determine the full two dimensional strain state. The only difference between them is in the angle between strain gauges. The 90° rosette is different as it only uses two strain gauge measurements to calculate the outputs. The 90° rosette should only be used when the principal strain directions in the plane are aligned with its strain gauges. Beacuse of this, outputs which aren’t relevant to a 90° rosette are automatically disabled. 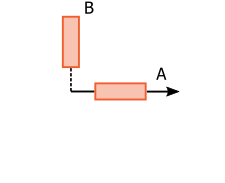 Rosettes offer automatic conversion of stress and strain units. Rosettes only use units available in the Physical Quantities Editor, where you can also define additional strain and stress units. Unit settings that can be dfined are:

Here you can define the parameters of an isotropic linearly elastic material. These are used to calculate plane stress outputs from rosette strain measurements.

For more information about Rosette take a look at the Rosette manual.