For more information about Modal test take a look at the Modal test manual.

Modal test is a process to determine the transfer characteristic of a system. It is most often used to find the natural frequencies of a mechanical structure using hammer or shaker excitations.

Modal test is a mathematical module that allows us to calculate the transfer function ($H$) between two signals.

Input and Output signals are usually mechanical or electrical nature. Mechanical means exciting structure with hammer or shaker and measure response with an accelerometer. Electrical can be for example input and output voltage of the amplifier in order to get transfer function of the amplifier.

Transfer function ($H$) is a relation between two signals in a complex form (real and imaginary vs frequency).

Calculations can be done in three ways:

For instructions on how to Add new module see Add module. 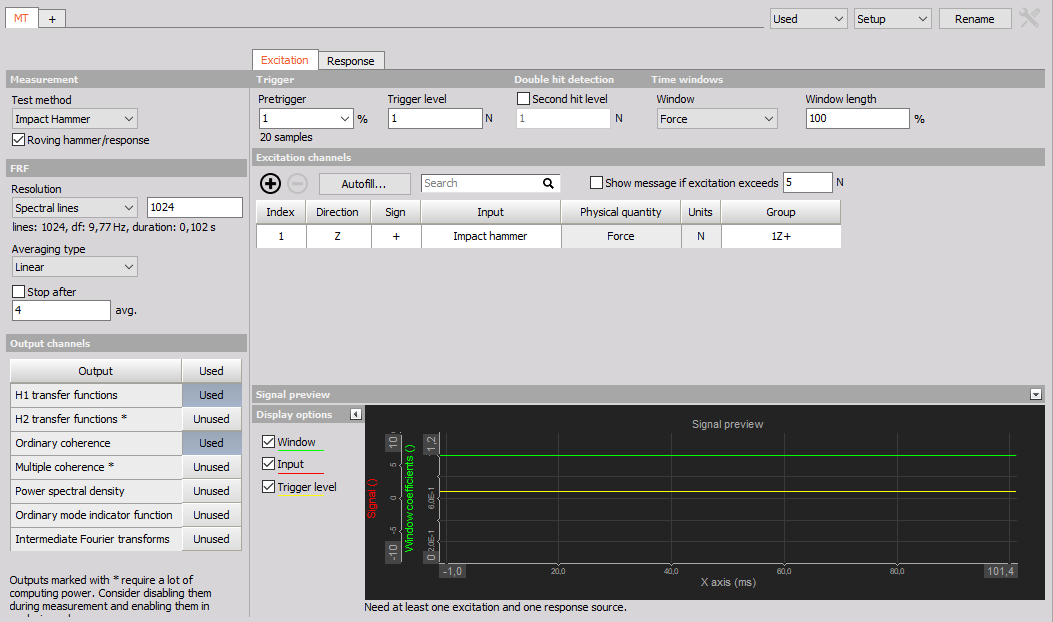 Transfer function is calculated via the standard Frequency response function algorithm or FRF for short. It is possible to calculate all excitation/response pair at once or in groups.

Do multiple measurements with one or more excitation points to measure one or more responses.

The resolution of results can be detemined with selecting:

Enable or disable second hit level detection with the check box and enter the desired value in the field below. The signal will be searched for peaks and if there is more than one peak which is higher than double hit detection level you will get a warning that double hit happened. You can check it on excitation spectrum. Then you can reject this measurement or continue.

All the seting from Function generator can be defined directly in Modal test module.

In ODS mode settings are similar to the Shaker method, except that we can’t use the Function generator and we are limited to one Reference “excitation” channel.

In ODS, one of the accelerometers is selected as the reference channel and other are selected as response channels.

Show message if excitation exceeds - This is just a safety that we don’t damage our structure. When the response acceleration from our system is above the limit analogue out and measurement are stopped.

Directly in Modal test module we offer a user to be able to see the preview if excitation and response channels.

With this preview the user can correctly set the trigger level and windowing.

AI start node input channel - Select the channel that will measure the first node of the structure Triaxial sensors (only for response ch.) - If multi-axial sensors are used, check the box to define the used channels under Geometry settings / Directions 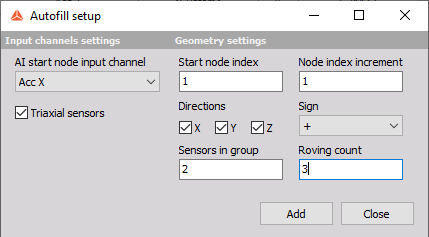 In predefined display you are able to see the progress table, FFTs of excitation and response channels, transfer functions, coherences and geometry. 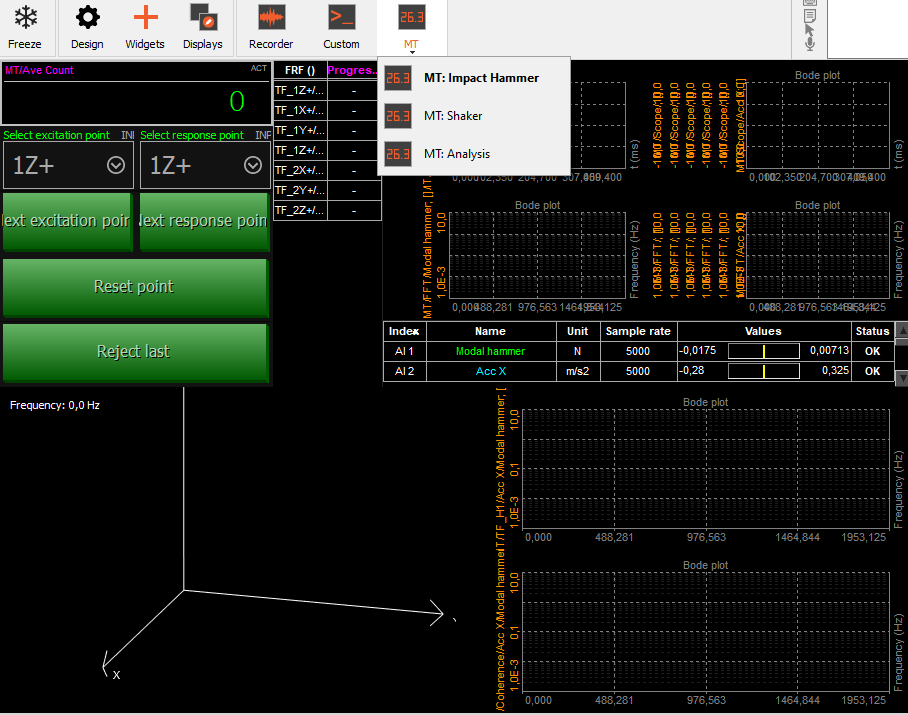 Visualize behaviour of the strucutre

How to visualize animation of the structure with FRF Geometry visual control see Modal geometry.

In the Pogress table all the transfer function are were defined in Modal test module are listed. When a tranfer functions of each group are calculated you will see a green indicator. Until the groups is measured, it will remain red. 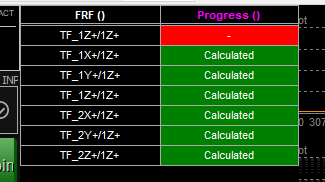 This is a visual control for basic modal analysis. You can use the yellow cursor in a 2D graph and set it to the frequency content of interest. Circle fit will find the nearest peak (resonance) and fit the circle into that data set. Then it will calculate the damping factor and more exact frequency (between line resolution of FFT). 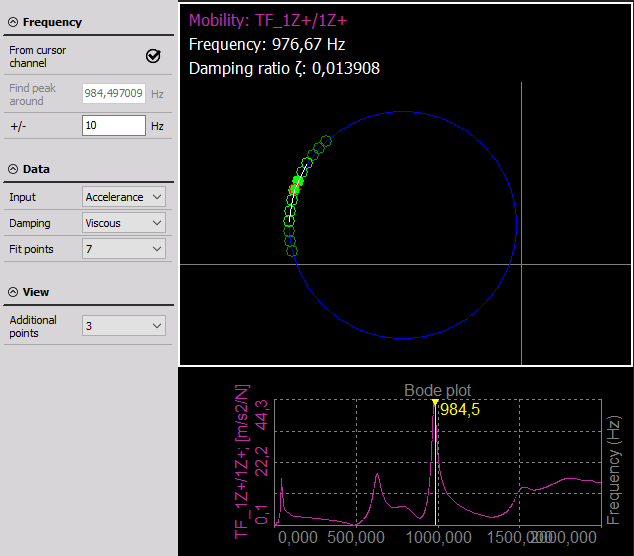 Dewesoft Modal circle visual control lets the user to chose between the structural and viscous damping model and calculate either damping loss factor or damping ratio from receptance or mobility, after first integrating or differentiating the measured FRF to get the correct form.

If we assume a structural damping model, the receptance forms a perfect circle on the Nyquist plot. The contribution of other modes can be neglected.

For the viscous damping model, we used the Nyquist plot of Mobility which likewise forms a circle-like curve around the resonance.