Dewesoft LIN bus module is able to listen to traffic on LIN interfaces produced by Vector Informatik GmbH. You can acquire LIN frames, which can contain multiple signals - channels.

The plugin requires a valid DEWESoft® LIN BUS license. To test the plugin, you can use an Evaluation license.

If all prerequisites are met you can proceed to hardware settings, where under extensions you will find LIN settings. All Vector LIN capable devices will be displayed here with an additional option for selecting the number of test ports. Each LIN channel is accompanied by a serial number for easier identification, when using multiple devices. 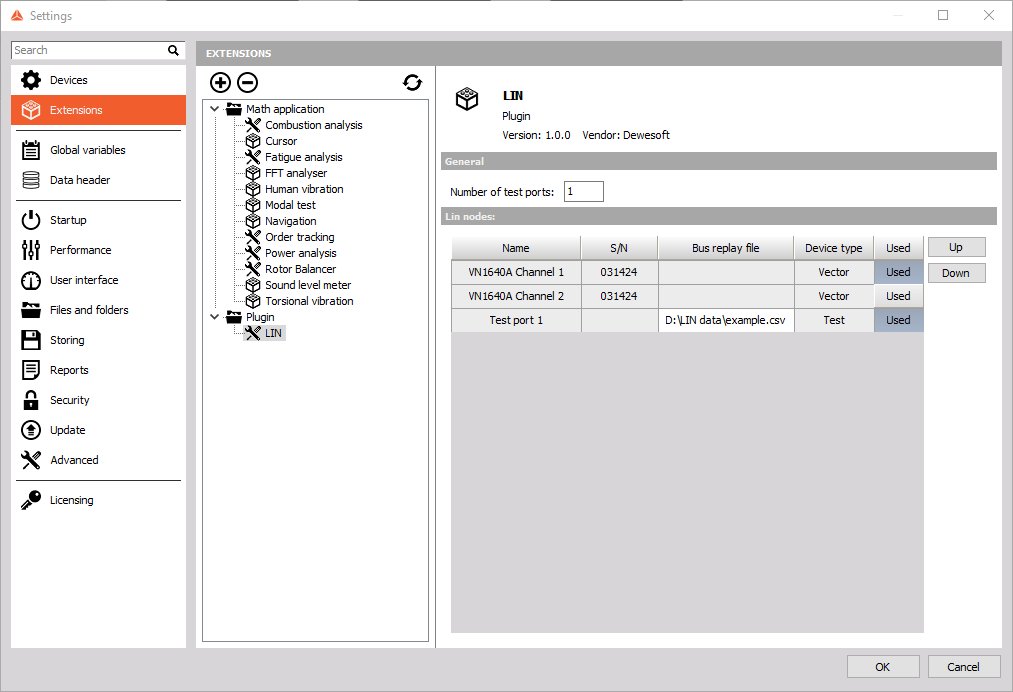 By using up and down buttons, located in the upper right corner, you can change the order in which used ports will be displayed in LIN setup.

NOTE: You can use one LIN physical channel with only one application. If some other application is using LIN channel, it will still be displayed in the grid, but set to locked.

As previously mentioned, you can select the number of test ports, which are meant for evaluation, quick tests and LIN setup configuration, without needing to connect actual hardware to your computer. Test ports support bus replay files, which simulate actual bus traffic from a file. Double mouse click on grid cell will open file dialogue, where you can select appropriate CSV file. If selected file does not exist or it’s not correctly structured, cell background colour will change to red.

You can create bus replay files by hand. The structure is pretty straight forward. The first line is a header line, which must always be the same as the example below. Rows following are definitions of LIN bus traffic, consisting of the following values:

NOTE: Data bytes must be delimited with tabulator key.

NOTE: From now on, we will be referring to LIN ports as LIN nodes, as they are already a part of LIN bus as listen-only LIN slaves

When you are done with hardware settings and you have at least one port set to used, you will be met with following LIN settings:

In setup mode, LIN node is already listening to all the traffic on LIN bus and decodes frames, which you already defined. So you can see the live preview of decoded data for each signal, which helps you determine if decoding is correct. You can edit some frame/signal settings directly from the grid (Frame name, Value type, Signal name, etc.), other settings are available by clicking on the Setup button. More on that in the following section. You can toggle signal’s Used property, which will enable or disable dewesoft channels belonging to that signal.

Under Frame / Signal section you will be able to:

When you click on Add button, a new window will appear. It is divided into two settings groups. 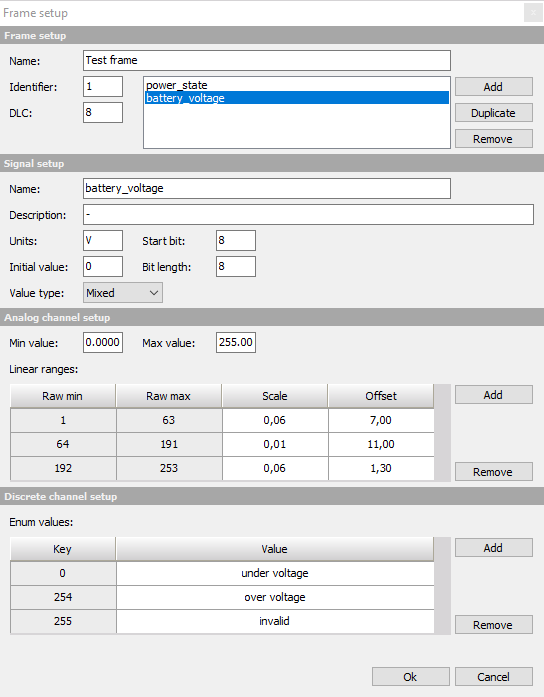 You can choose between multiple decodings:

When you are done setting up LIN frames, you can easily export them to an XML file, by clicking on Export button. You will be met with save file dialogue, where you can choose the file name and location. All LIN frames from currently selected LIN node will be saved to that file. That includes all dewesoft channel properties.

Importing LIN frames from file to the existing list can be done by clicking on the Import button. You will be met with open file dialogue, with the option to select between two file extensions: LDF and XML. Choosing XML will let you import files you or somebody else previously exported, choosing LDF is described in LDF import section.

If there are any collisions between existing and imported frames (the same frame identifier), you can choose to overwrite existing frame with imported one, or you can just skip importing that frame. You can also choose options Yes to all or No to all which will do the same for all detected collisions.

LDF - LIN description file contains the configuration of a particular LIN network. It contains a lot of data like master schedule tables, publishers, subscribers, frames, signals, bus speed etc. So if you have a LIN description file for your LIN network, you can save a lot of time, by importing all frames and signals to currently selected node in setup. If bus speed defined in setup mismatches with bus speed defined in LDF, you will be prompted, which one you prefer to use.