When you press the Setup button on newly activated FIR Filter line, the following FIR filter setup window will open: 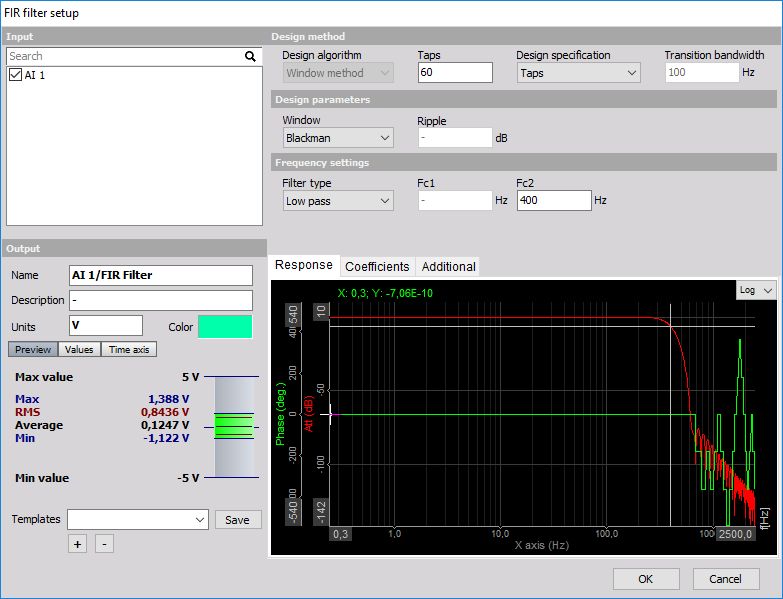 For detailed information about basic settings of the input and output channels see  -> Setup screen and basic operation Math.

FIR stands for finite impulse response. In theory, it means that the response to the impulse will be zero after some time (exactly after the samples will equal to filter order).

Another nice property of the filters is that basically phase response is linear. The phase shift in time is half of the number of samples if the filter is calculated for the samples in the past.

Since Dewesoft has calculation delay, we can use a trick to compensate the filter delay and have absolutely no phase shift in pass as well as in the transition band of the filter. This is a major benefit compared to the IIR filter where we always have a phase shift. The drawback of FIR filters is that they will use more CPU power compared to IIR.

We will make a comparison between these two types a bit later; now let’s take a look at basic properties how to set the filter.

For FIR Filter you can set:

You can select Window type from the list. The window defines the behavior of the filter in the transition and the stop band (the height of the sidebands and the width of the main band). For common usage, Blackman window is quite good choice, because the side bands are extremely low.

In this field, you can enter Taps.  The taps of the filter define the number of coefficients of the filter and that will directly affect the slope of the transition band. The filter taps are not directly comparable with FIR filter. 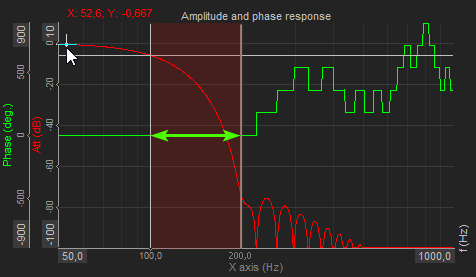 When a Kaiser Window type is selected, new Ripple field appears on the right side of the Window type field. In this filed you can enter ripple value in dB. It tells the maximum allowed pass band ripple of the filter. The more this value is, the bigger will be non-linearity in the pass band, but the filter will be steeper.

The filter cutoff frequency defines the -6 dB point (half amplitude) of the filter. You can enter the Cut-off frequency in the field:

You can choose between Response curve preview and Coefficients display. 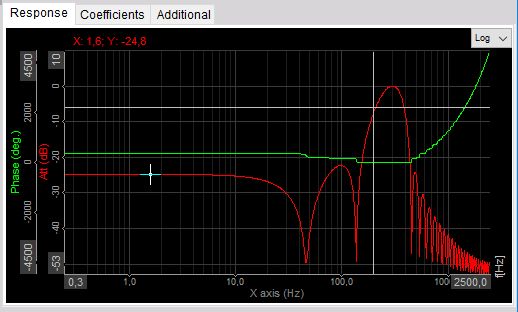 The other display is the display of coefficients. The upper graph and the left table shows the filter coefficients with which the raw data is convoluted. The lower graph shows the response of the filter to the step response. 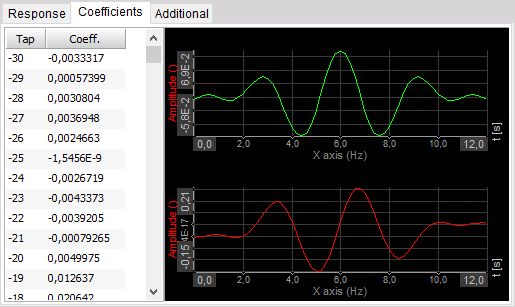 On Response curve preview you can choose between Logarithmic and Linear display, you can also edit coordinates value and auto scale Yaxis.

Another fact is while we can get ratios of cutoff frequency to sample rate of 1/100000 and more, we can achieve only limited results with FIR filter. The ratio increases with the higher number of coefficients.

Enough of the downsides, let’s look at the response graph at 20 Hz (exactly at the limit). The green curve is the original sine wave while the red one is calculated with IIR filter. We can clearly see the phase delay of the output.

The blue curve is the response of the FIR filter which has absolutely no phase shift. For lots of applications, it is very important that the signals are not delayed and there the use of FIR filters is very advantageous.