Dewesoft beside General mathematics in Basics operators allows different types of functions, which are grouped in six tabs in Other math functions section of Formula editor:

For information about interesting use of mathematics function see also:

DIV integer division (Delivers the integer part of the division)

MOD (Delivers the rest of a division) MOD is calculated using the following equation:

All functions have a short hint. When we move the mouse over the icons, we get an explanation of the function and its syntax. 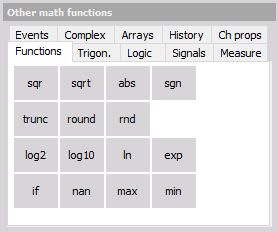 Functions examples and their explanations:

INFO: SQRT of a negative number sqrt(-9) will always deliver 0 instead of a complex number in DeweSoft. 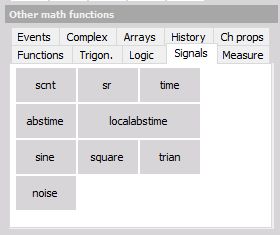 The VGPS Longitude and Latitude signals received over the CAN Bus should be separated into DEG:MIN,xxx. The CAN data is received in MIN like it is shown below. With math functions, the regular GPS display should be produced. Below the result is shown. 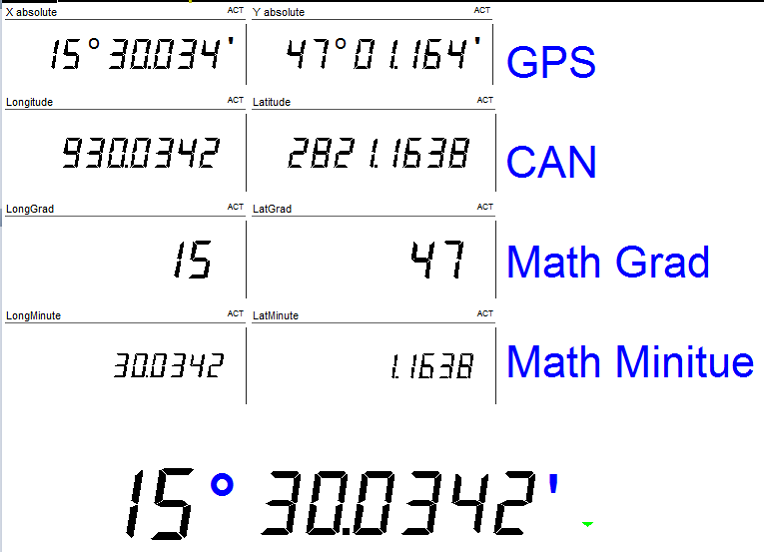 MATH: trunc(‘Latitude’/60) dividing by 60 will convert it from minutes to deg, where the trunk function will eliminate the digits after the comma. -> result [°].

So if the channel, could be a number or any Dewesoft channel, is equal or bigger than 12, the Condition becomes true and result1 will become rue. Otherwise, the condition is false and result will become true.

If the ID channel is equal or bigger than 1, the statement is true and the velocity channel will be chosen as output, otherwise displacement. So either velocity or displacement is used for output depending on the condition, both at the same time are not possible.

The channel will deliver only a NAN if STWH_Angle is smaller than 90deg. And if the time base of the math channel is forced to asynchronous output. Otherwise because of a sync. channel is used in the formula (velocity) the formula will output a Sync. channel and NAN will become zero.

The picture above is showing the Timebase setting of the math channel. The async. channel has to be used in the formula otherwise it is not possible to select it in the channel selector. The interpolation has to be set to never.

The higher value if both channels will be output.

NOTE: Also, multiple max could be used in one formula.

The Trigonometry tab contains all required angle based functions. 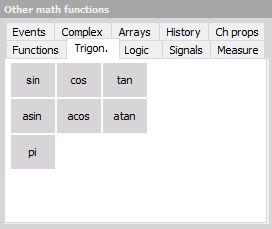 The Logic tab contains required logic functions. Please be aware that the logic operators OR, AND, NOT and XOR works only with PURE digital values - 0 and 1. Therefore all analog channel must be first digitized before used on this operators (like ‘velocity’<100). 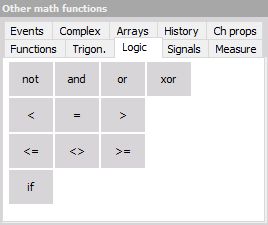 Depending on the application, generated signals may be required. Therefore you can select the common signal forms in the Signals tab.

Signals examples and their explanations:

Sample counter - Delivers the samples acquired from start of the measurement. The counter will be rest at start storing. 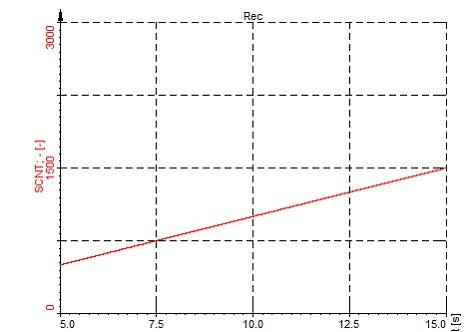 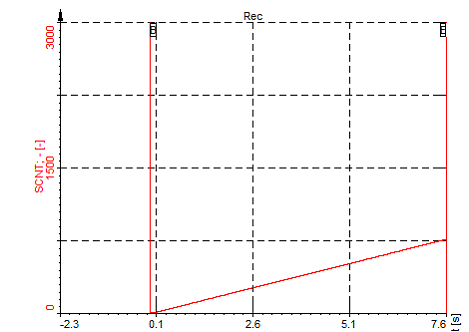 The above picture is showing the result, while at the bellow picture the reset after start storing could be seen.

EXAMPLE: If external clocking is used and the signal should be shown in an XY diagram angle based, together with the MOD function we can create an angle signal.

Let’s assume we are using an encoder with 720pulses/rev.

SCNT MOD 720 will deliver a sawtooth which runs from 0 to 720. To get the angle we have to multiply it by 0,5deg so at the end we get this formula.

SCNT MOD 720 * 0.5 this channel could be used in an XY diagram to show the resulting angle based.

The only disadvantage will be, if we get the wrong pulses from the encoder (noise, spikes), the angle signal will shift.

If a TRG pulse is also available, CLK and TRG, this signals could be also routed to a Counter, where this is eliminated.

Because the TRG PULS will reset the counter every revolution.

This is a similar function to SCNT. The only difference is, instead of samples we get the time in seconds, independent which sampling rate is used.

Also, the TIME function is reset at start storing.

The resolution is linked with the sampling rate. 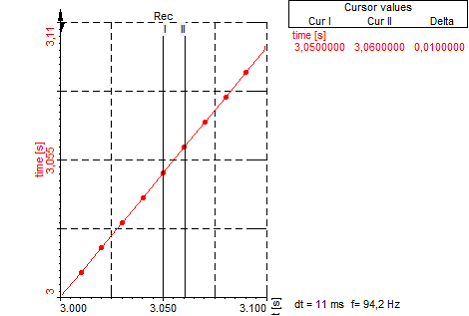 EXAMPLE: Show actual value averaged every 10s in a list and export it to Excel.

This will create a sawtooth with a period time of 60s. Look at the picture below. This is channel will be used as an event channel in the LATCH math to average the actual channel and show it in a list. The averaged values could be exported to Excel or TXT asynchronously. To export it asynchronously at Export only the asynchronous channels have to be selected.

NOTE: Generated signals can only be used for mathematics, display and storage. It is not possible to use them for analog output!

If you require analog output (e.g. from a function generator) you have to use the DEWESOFT-OPT-FG option.

Different measurement values and information are available in the Measure tab. Again here the conditions have to be logic operators. It will again not work to write ECNT(‘Input TTL’) and assume that the transition will be done on value bigger than 1. The correct equation would be ECNT(‘Input TTL’>2.5) where
‘Input TTL’>2.5 give logical 0 or 1. 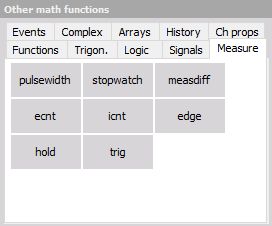 Measure examples and their explanations:

The hold function is used to latch or hold a single value if a condition is met.

In the example above the function will hold the actual pressure if the temperature is higher or equal 45deg. 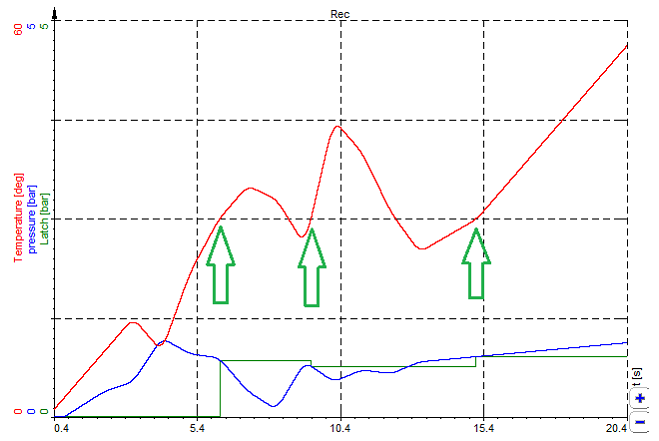 The picture above is showing the function in a recorder. All the time when the temperature exceeds 30deg (green arrows), the actual pressure channel is latched. 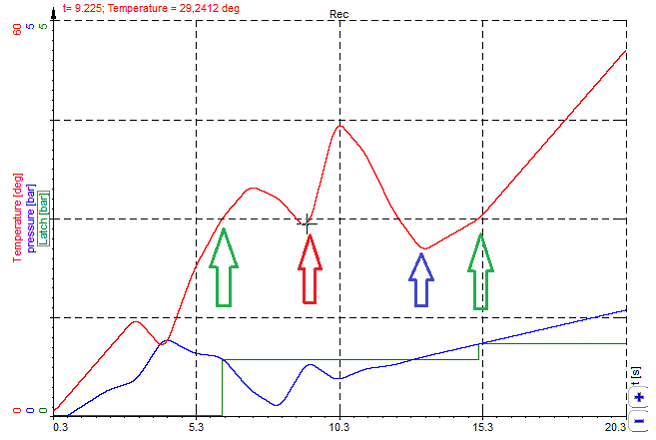 The picture above will illustrate this function:

EXAMPLE 3: Remove offset from a Channel.

HOLD(channel, condition)  … will latch the actual value of the channel if condition become true.

So even during the measurement, an offset compensation could be done by pressing a specific key. The picture below is showing an example. The ‘keypressed(49)’ channel is indicating the pressed key in an additional math channel to make it more obvious. 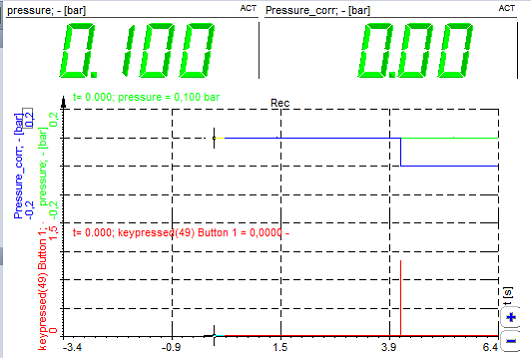 The Events tab allows defining keys as signals. Each time when you press the defined key, you receive a peak in the signal. You can display that e.g. in the recorder, scope, etc. 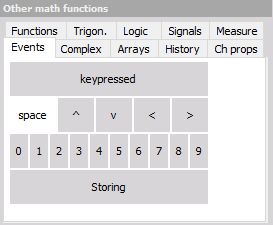 Events examples and their explanations:

A few predefined keys are already prepared as shown in the picture below. So if you press the [1] button below the line ‘keypressed(49)’ will be automatically added to your formula.

Every time the [KEY 1] is pressed on your keyboard a signal is produced. 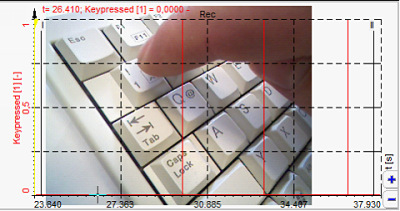 Almost any key could be used in the ‘keypressed’ function. The value in the brackets is reflecting the virtual key code in decimal.

Below you will find a list of the most popular keys. You have to convert them from Hex to decimal. So [Key 1] ->31hex -> 49dec. The decimal value has to be entered Into the keypressed function -> keypressed(49).

MATH: keypressed(49) produces signal from 0 to 1 with a duration of 1 sample if [1] Button is pressed.

This could be used in the latch Math to latch the actual or average value of an other channel(s) in a list.