With Filter option on IIR Filter settings section you can set:

You can select Prototype of Filter from list between:

The highest as the order is, more calculation power will be needed to calculate the filter. We need 6 multiplications for every two orders of the filter.

The filter cutoff frequency defines the -6 dB point (half amplitude) of the filter. You can enter Cut-off frequency in field:

You can enter Fc1 for Low pass, Band pass and Band stop filter.

You can enter Fc2 for High pass, Band pass and Band stop filter.

You can enter Fc1 and Fc2 for Band pass and Band stop filter.

You can set also Ripple. Ripple is the maximum amplitude error of the filter in the pass band in dB.

NOTE: This field appears only for Chebyshev filter Prototype.

On the lower side, we see some useful information of the chosen filter. First is the response curve. 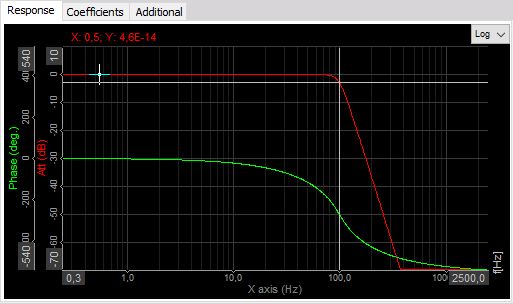 The phase shows the delay of the signal in degrees.

Lower table shows the coefficients with which the filters will be calculated. The filter is split into several sections for increased stability, so the result from the first section is taken to the next section and so on. These coefficients can be also copy / pasted with a right mouse click on the table to be used from/in other calculation programs.

On Response curve preview you can choose between Logarithmic and Linear display, you can also edit coordinates value and auto scale Y axis.

Zeroes & poles diagram shows the position of filter zeroes and filter poles and can suggest the stability of the filter. 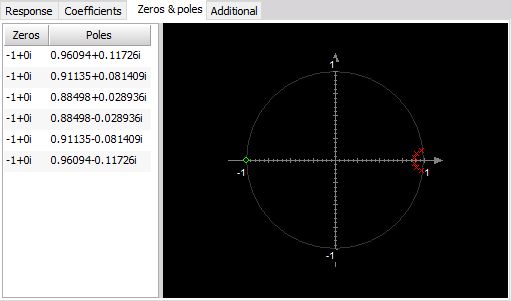